Future Advocacy for Equality in Property 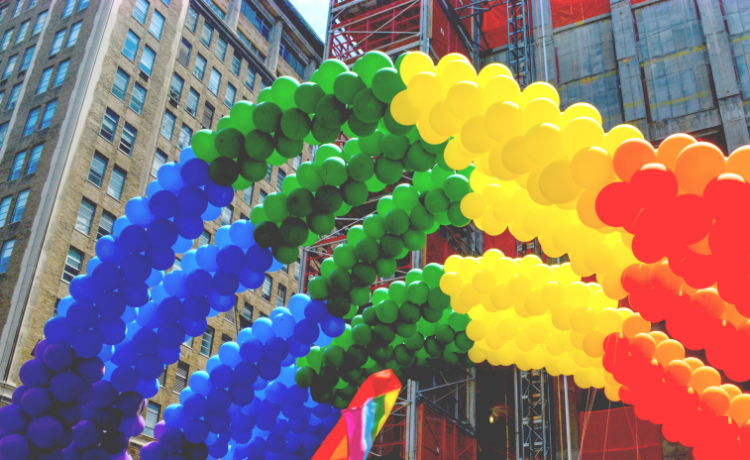 At almost two metres tall, Marcus Skeggs stands out. But when he wore a sequined black tuxedo to a national award ceremony in October 2019 – flanked by management and colleagues from property technology company DisplaySweet – he made quite the impression.

“It was a bold choice,” Marcus admits.

“I had a fabulous time. When we went up on stage to collect our award with everyone including our investors I felt super comfortable and loved every
minute of it.”

Handshakes and compliments followed, confirming Marcus’ bold wardrobe choice while validating his determination to always be himself.

It’s become a permanent mindset and something he’s chosen to advocate for on behalf of others after having found his groove within the property industry for only a handful of years.
A supportive environment has underpinned Marcus’ professional success, particularly since DisplaySweet managers suggested and encouraged him to apply for the UDIA’s inaugural Legends and Legacy program in 2019.

Established by the UDIA NSW Councillor and CEO of Diversified Property Group, Vanessa Pearson, the Legends & Legacy program helps foster the industry’s next generation of young leaders, providing invaluable networking and mentoring opportunities for Marcus and 13 other talented and future property leaders.

“Part of the appeal was the opportunity to form new networks and friendship groups, with passionate and like-minded people,” Marcus said.

“You don’t normally have access to this caliber of experience, it was a good opportunity to be more involved in the industry.”

The group was also given unprecedented access to some of Australia’s most successful and prolific property executives including Iwan Sunito, Chief Executive Officer of Australian development company Crown Group and Western Sydney’s dairy farmer and land developer Tony Perich.

A natural storyteller and creative personality, Marcus relished the opportunities and instant support from his newly established circle of contacts.

After working in advertising and design with Edward James (now the James Agency) on property campaigns and marketing for almost three years, Marcus joined Melbourne-based proptech
company DisplaySweet as an account sales manager in April 2018.

He relishes the role of winning new business and travelling across the eastern seaboard to see client projects launch to the market using the DisplaySweet technology.

“A lot of people hate cold calling, not me, I love the opportunity to speak to someone new,” he says.
“The key is to treat everyone with the same level of respect. It doesn’t matter if I get through to a Secretary, a Marketing Manager or a CEO, everyone has something to contribute. Treating everyone equally should be society’s default but unfortunately it’s not always the case.”

It hasn’t all been smooth sailing for Marcus after an incident at work during a training day with clients became a watershed career moment, strengthening his resolve to promote inclusion within
the industry.

While demonstrating the DisplaySweet app on an iPad to a team of agents, a Sales Director began to make comments about not being ‘creative’ enough to understand the technology.

Marcus took his time to explain the software and process in greater detail but the comments became personal.

“Out of nowhere this agent said in front of his colleagues ‘a marriage is meant to be between a man and a woman’ and a few minutes later ‘children deserve a mother and father’,” he said.

“It was not long after the Marriage Equality Vote had been passed and it was the first time I’d ever encountered anything like that. I felt like I had been sucker punched.”

An uncharacteristically quiet Marcus returned to work unsure of how to handle the situation, admitting the incident affected him more than he would have liked.

“I decided to let John [DisplaySweet co-CEO John Paige] know what had happened and he was super supportive, he said it was totally unacceptable and called the client,”Marcus said.

“That’s amazing and rare for a CEO to be so forward thinking and care so much about his employees. He said I could let it define me or I could do something about it so it didn’t happen to others.”

As an active member of the Queers in Property (QIP) group, Marcus is an advocate for the LGBITQ+ industry and will take a seat on the UDIA NSW Diversity & Inclusion committee in 2020.

The 22-member committee’s mandate is to advocate for change and greater equality within the development industry, a directive Marcus fully endorses and a vehicle with which he hopes will help provide a voice for those groups who don’t have one.

“The drawcard for me was the diversity part, as the industry is lacking in diversification from the LGBITQ community’s point of view,” he said.

“But there’s also a lack of marketing and sales roles represented in these committees. There’s a lot of advocacy on behalf of developers, which is great, but without marketing or sales teams these
projects wouldn’t go far.”

It’s also an opportunity to set an example that it’s okay to be yourself in the workplace and a platform with which Marcus hopes will also bring about an era of cultural change.

“This is my opportunity to start flagging issues that can’t, and shouldn’t be ignored, because someone who may not be as strong as me might have a similar experience that not only ruins their day but their career too,” Marcus said.

“I’ve always felt comfortable being myself and that experience made me feel terrible, not about the work I was doing, but me as a person and that’s not okay.”

Leave your contacts and our managers
will contact you soon.

Your message is successfully sent...

These cookies are essential to our Platform as they facilitate our authentication, sign-up or log-in process, and enable you to access a website or application or use its features. These cookies allow you to fully utilise our Platform and Services, and if they are not used, they may not function properly. We may use Strictly Necessary Cookies to collect encrypted user session identifiers, device identifiers, demographic information, log-in identifiers and information necessary to authenticate users on the Platform. These cookies are mostly session cookies and will be deleted from your computer or mobile device after each browser session.

These cookies enhance the user’s experience when they visit a website. We may use Functionality Cookies to provide enhanced and more personalised content, language, and features or to count articles viewed, to allow us to use credentials to automatically login a user, to determine the approximate device location a session, to store selected settings or remember the choices you make while browsing the Platform (such as customising a certain webpage, remembering your preferred language or remembering your username), to provide enhanced and more personalised content and features or to count articles viewed. To facilitate your access to our Platform, our servers receive and record information about your computer, device, and browser, which may include your IP address, browser type, and other software or hardware information. If you access the Platform from a mobile or other device, we may collect a unique device identifier assigned to that device, geolocation data, or other traffic information for that device. These cookies are mostly persistent cookies and will remain on your computer or mobile device for the period of time specified in the cookie.

We and our service providers may use analytics to collect de-identified information about your use of the Platforms to help create reports and statistics on the performance of the Platforms and possibly to present you with personalised content. Analytics Cookies gather information such as your IP address, device type, device operating system, referring URLs, geographic information, date and time of page visits, and which pages you visit the most. The information allows us to measure the number of visitors to our Platforms, see the overall patterns of usage on the Platforms, help us record any difficulties you have with the Platforms, and show us the effectiveness of our advertising and marketing. Information collected via the use of Analytics Cookies will be de-identified at all time.

We may use Targeting and Advertising Cookies to provide personalised or behavioural advertising. This is done by delivering online ads based on your previous web browsing activity. Cookies are placed on your browser which will remember the websites you have visited. Advertising is then personalised based on your browsing activity and displayed to you when you visit websites who use the same advertising networks. These cookies may be combined with other information acquired from third parties. We may share this information with other organisations only for the purpose of targeting marketing and advertising and otherwise in accordance with applicable laws. This information, such as email address information, may be provided to other organisations such as Facebook and may be used by us for the purpose of retargeting and remarketing. This information will be provided securely and/or encrypted. We may also target you with ads based on your geographic location (determined by your IP address).
If you opt out of Targeting and Advertising Cookies, you may still see ads on our Platforms, however, we will not be able to personalise the ads you see based on your online behaviour. However, you may still receive targeted ads from other third party websites or social media platforms, where you have not opted out.

Our Platforms and Services may have social plug-in capabilities which may include cookies which allow you to register on our Platforms with your social network account. These cookies may also track both members and non-members of social networks for additional purposes such as behavioural advertising, analytics, and market research.